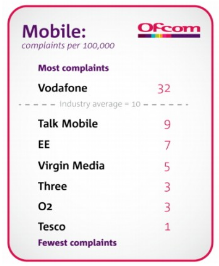 There has for years been the old saying in marketing "There is no such thing as bad publicity" which is believed to be a quote made by the American showman Phineas Barnum. He was a man who never missed the chance to present himself to the public, which could be why there is a belief that this quote has some truth in business. This quote was further endorsed by the late Oscar Wilde who went on to say "The only thing worse than being talked about, is not being talked about". So how much truth does that have in a world where "being talked about" is easier than ever in a world than has become ever Dependant on the world of social media?

To test out this logical lets take a look at the mobile phone company Vodafone. Here in the UK they have been hitting the headlines for all of the wrong reasons. Only last week they were fined £4.6m by the regulator Ofcom for "serious" breaches of consumer protection rules. This is the largest ever fine that Ofcom has ever issued to a mobile phone operator. Ofcom ranks the mobile phone provider the worse for customer complaints, with the mobile operator recording 32 complaints per 10,000 customers compared to Tesco Mobile who had the best rates in the industry of just 1 complaint per 10,000 customers. Needless to say this story of bad customer service and care by Vodafone has been hitting the headlines for months and giving Vodafone plenty of media attention and coverage.

So does the old saying "There is no such thing as bad publicity" ring true in Vodafone's case? To test this we need to assess the impact that this reputation and media coverage of poor customer service has had on the organisation. The best indicator in a market that is saturated and very competitive is customer figures as these can be directly linked to the UK domestic market that Vodafone operate in. If the saying is correct then the increase in the publicity and attention for Vodafone will actually led to an increase in their customer base, something that would be exceptionally impressive in a very competitive market.

The results for Q1 from Vodafone suggest that Uk sales are down 3.2%, whilst customer numbers has also fallen to below 18 million to 17.974 million. This is very disappointing for Vodafone but also does highlight that the statement "There is no such thing as bad publicity" may not be so true in the mobile communications world in 2016. To make this a fair comparison we need to look at the impact that the "good news" had on Tesco Mobile. In 2015/16 Tesco Mobile reported that it actually increased its customer numbers by 5% to 4.6 million customers, which also maybe goes to highlight that actually only good publicity has a positive effect on an organisation these days.

There could also be some further evidence that maybe this bad publicity is not all that good for Vodafone. According to the Brandz UK ranking Vodafone is still the UK's most valuable brand, however it has actually fallen 4% in value to $37 billion. Of course the reality if that other factors could impact on the value of the band and not solely the bad publicity that they have had over poor customer service. However this is something that can damage brand values and in a saturated market that is highly competitive, maybe the £4.6m fine by the regulator is "cheap" compared to the long term brand damage that this has caused to the organisation.