You will have heard all about it in the news. Does the EU need the UK more than we need the EU? Well this is a real topic of debate and there are arguments on both sides of this debate, however in this short blob I am going to look at UK imports and exports, considering what the general trend tells us about the answer to this question.

First off, let me explain that the gap between your imports and your exports is known as your balance of payments. An economy would ideally want a positive balance of payments as this means that you are exporting more than your importing. Why is this important? Well because if you are exporting then this means that you are selling your products / services to another country and in return they are giving you money for these items. Of course if that money is going into your economy, then it has to be going out of someone else's economy. Put simply in an economics sense an economy that is a net exporter is a strong one.

According to the latest published data this is what the UK economy looks like at the current time; 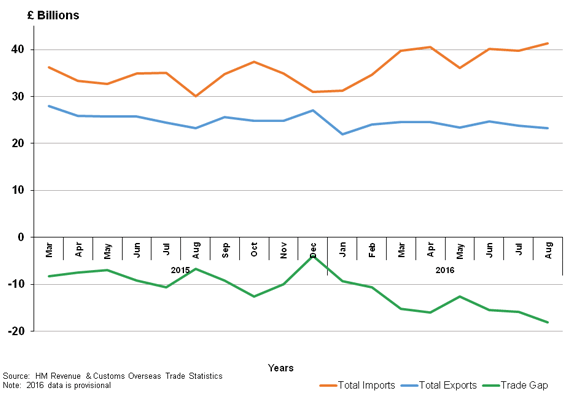 As you can see from the trade gap line (balance of payments) the UK is still a net importer. This means that we are buying in more goods and services from other countries than what we are selling. Even though we have a weaker Pound which is believed to favor exporters, we have seen our imports increase and our exports follow a small trend of decline. This is certainly interesting information as it has been believed that the weaker Pound following the Brexit vote would have actually seen a surge in exports and a decline in imports. There is still time for this to change in future data sets, however so far the trend does not appear to be changing that dramatically, even given such currency depreciation.

What does the above information tell use about the greater need of the UK to the EU? Well it's possibly true. The data above suggests that the UK is an excellent customer, one that will purchase many more items than it sells. If you image this is the concept of the EU being a supermarket, would the management of that supermarket really want to take steps to stop one of their best customers shopping and spending in store? The answer you would guess is no. If this is the case, then it is reasonable to expect that the EU will be looking to establish some form of trade deal with the UK.

However all of the statistics that I have used above are global and don't focus solely on the EU. To help us fairly answer the question we need to take a look at what is happening between trade with EU members. The following data makes a comparison regarding how UK trade has changed, following the devaluation of the Pound. Remember a weaker Pound should actually encourage exports and discourage imports. 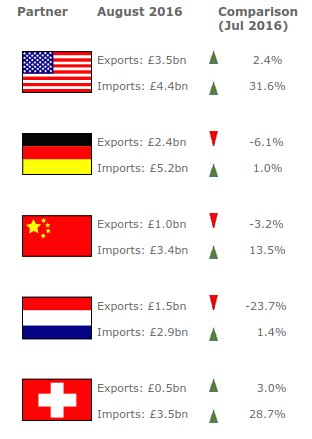 Out of the 5 countries above only 2 are actually members of the EU (Germany and Netherlands). Germany is also then largest economy in the EU and notice that even despite the weaker Pound the UK has seen exports to Germany decrease and imports to increase. This is again the same trend for the Netherlands. This again does go to support the view that the EU does need trade with the UK, as would any business really want to stop some of its best customers buying from it? The real impact of the weaker Pound appears to be on the exports that the UK makes with the USA, however still at the same time the UK is importing more than it is exporting.

So what does this data tell us about the answer to the question of; Does the EU need the UK more than we need the EU? Well on the face of this information yes! However remember that there are many factors that need to be considered when making a full judgment.